Vinchin Blog Ransomware attacks Acer, will backup save $50 million worth of data?

Ransomware attacks Acer, will backup save $50 million worth of data?

Recently, one of the giants in the computer industry, Acer, encountered ransomware attack launched by the notorious hacker organization REvil, and was required to pay the most expensive ransom money of history, 50 million dollars for retrieving back encrypted data.

Acer has been focusing on providing IT product services on a global scale and developing cloud technologies and solutions in conjunction with IOT. As one of the world’s top two PC manufacturers wins much popularity, Acer’s customer occupation once ranked NO.1 within Europe and Africa. In 2014, the sales number of Acer’s personal PC ranked NO.4 in the world, with overall revenue of 10.39 billion dollars.

REvil announced on their data leaking blog that they’ve successfully broke into Acer’s company system, and posted several internal files and pictures including Acer’s financial reports and related contact e-mails with the bank as direct testaments. 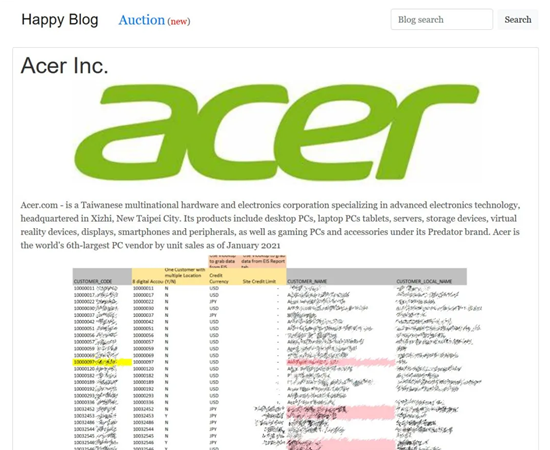 No clear answer was given by Acer as to whether it was attacked by the REvil ransomware, only with a statement showing the company has reported the recent abnormal situation to the relevant local enforcement agency (LEA) and data protection agency (DPA).

According to the report of media, the negotiation history between Acer and REvil began on Mar.14 showed that Acer's representatives were shocked by such a huge number of ransom. Not only that, REvil even issued a vague warning to the company as "Don't repeat the history of SolarWind", dropping a hint of how big the impact will have on IT environment of massive Acer’s customers if they refused to pay, attaching an offer that 20% discount can be accepted if Acer could process payment before Wednesday, then they’d provide decryption tools, bug reports and deleted stolen files for exchange.

The 50-million-dollar ransom required by REvil this time is the largest known ransom of history so far, breaking the record previously held by the large milk chain retailer Dairy Farm with a number of 30 million dollars also paid REvil for data decryption.

Various examples of tech industry giants who own mature IT infrastructure and network equipment with highest security level like Acer still fail to completely escape from the fate of becoming a victim in such cases have strongly raised our alert to well protect important data in advance.

With Vinchin Backup & Recovery, users can customize their own backup strategy on demand, in case the production environment is under attack, they can still restore the latest available backup data in a matter of time, minimizing data loss and threats of ransomware.

As one ransomware attack falls and another rises quickly, data backup can always be the life-saver to business, and now we can only hope that Acer has deployed one proper solution, or let the 50 million dollars be the price of buying a lesson to learn the importance of backups.